Why You CAN Buy Organic Virgin Olive Oil, But You Probably Won’t

Interestingly though, you won’t find Organic Virgin Olive Oil very many places in the US. That’s because there’s not much of it that is produced, nor is it often demanded by customers. It’s just not that readily available. So why is that? 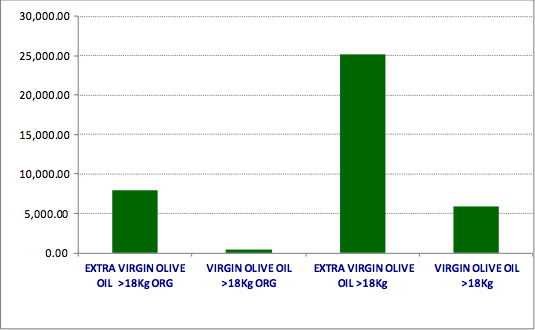 This chart is quite indicative of the respective popularity of each grade here in the US as well. It stands as a good representation of why you CAN buy Organic Virgin Olive Oil, but you probably won’t-- many suppliers just don’t carry it.

Why? Because there’s just not that much to go around.

So why don’t you see more Organic Virgin Olive Oil available on the market? It all has to do with supply and demand.

The oils themselves aren’t really that different. The organic versions of each of these oils are produced in the same way that the non-organic versions are. The biggest difference is that they are made organically grown olives.

Many manufacturers and distributors feel like if they’re buying certified organic oil (and paying the premium for it), they might as well go with the highest grade of oil for a few extra cents. A consumer (either in food service, or a consumer of a manufactured product) is going to appreciate seeing Extra Virgin Olive Oil name instead of Virgin-- particularly if they are interested in Organic oil in the first place. That’s because the typical consumer that looks for an organic oil is looking for high quality and willing to pay more to get it.

The typical olive oil producer wants to sell their organic olives as Extra Virgin. Because it’s a higher quality oil, they can get more money for it. With a little love and extra focus, they can generally make sure that their organic olives are picked and pressed in such a way that the oil will be deemed Extra Virgin. Ideally, if a grower spends the extra time and investment to grow their olives organically, they will want to get as much money as they can for those crops.

If you really do need Organic Virgin Olive Oil though, you can find it. You’ll just have to look a bit harder!

People are always wanting to know about the different grades of olive oil: how they are made and what they are used for. Let's really dive in and talk about the specific...