Bulk Organic Olive Oil: What You To Know

People are always wanting to know about the different grades of olive oil: how they are made and what they are used for. Let's really dive in and talk about the specific grade of Organic Extra Virgin Olive Oil. Sometimes it can seem so straight forward when you hear about organic EVOO this it's easy glance over.

To really understand, we've outlined some basics below about Organic Extra Virgin Olive Oil that you should know.

To make Extra Virgin you simply grind the olives (including the skin, fruit and pit) into a paste.  Then you press or spin that paste to extract the liquid from the olives: one part of this liquid is oil and the other part is water.

That is literally it! There is no further refining or processing that is done to the oil aside from (maybe) filtering it. Given that olives are technically a fruit, this makes producing EVOO (or Organic EVOO) as straightforward as fresh squeezed olive fruit juice.

2. Light, Heat and air Do The Most Damage To EVOO

The three main things that can damage olive oil are light, air and heat. When exposed to any of those things, they can cause the oil to begin to oxidize and will develop off-colors and/or flavors.

We did an experiment a while back to demonstrate this: Organic EVOO was poured into a small clear glass bottle with an open pour spout. This was left our sitting in direct sunlight for a couple of months.

The same lot of olive oil was also stored in a larger 1 gallon container, tucked away in a cool, dark cabinet throughout the experiment.

At the end, the clear glass bottle of Organic EVOO was the color of canola oil. It also smelled and tasted terribly bland, plain and off-putting. You see, it was affected by all three environmental dangers:

It didn't take long for these three factors to completely ruin the oil that was put out on display. At the same time, the oil that was stored in a cool, dark room remained in great quality: it stayed a dark rich color and a delicious flavor. The picture below is of the oil at the end of the experiment (left) compared to oil freshly poured (right).  As a reminder, this is the exact same lot of Organic EVOO. 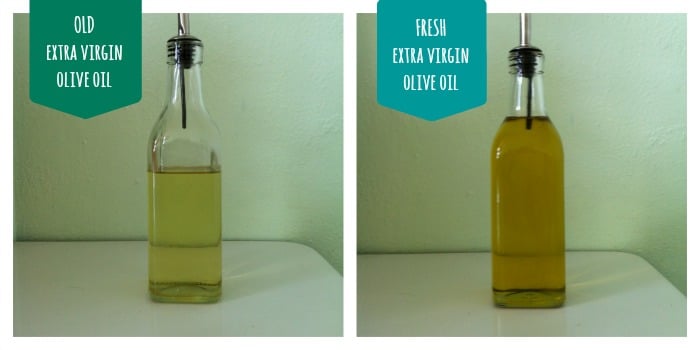 What is the moral of the story? Your oil is not meant to just sit out in a clear glass bottle. Keep it in a closed dark container, away from any light or heat source.

Each breed or type of olive is called a varietal. Each varietal has a unique taste and color. Just like an apple, there are lots of varieties that each taste different. The varieties used (along with when it is harvest) will create a very specific taste and color of olive oil.

It is important that we address a common myth here: if your oil is dark green it doesn't mean that the oil is a higher quality than an oil that is light colored. Each varietal of olive is unique and produces different characteristics, but no better or worse than each other. Regarding the taste, if the oil has a stronger peppery flavor it doesn't mean the is oil better that an oil which tastes buttery or grassy. They are just different.

Now in the bulk oil world, many of the farmers in high-production area plant olive varietals that are common in their country. With this being said the olive oil from the country is known to taste a particular way. So just make sure to note and remember, it's not the country that makes it taste a certain way - its the olive variety that country is partial to planting.

Olive oil that is made using only one olive variety is called a monovarietal and is more common in small retail or boutique settings. The bulk oil world often utilizes co-operative farms and olives are grown by multiple farmers.  In this setting, oil is typically made up of a blend of several varietals.

4. Clear and cloudy versions are both Normal

Once an Organic Extra Virgin Olive Oil is produced it may be filtered to create a final clear oil.

When EVOO comes directly from the olive press/centrifuge, it is cloudy and opaque. The opaqueness is caused by many many micro-olive particles in the oil. The opaque version of organic EVOO is known as unfiltered oil.

This oil can also pass through one or multiple sets of fine filters, which collects the olive particles and grit, and allows the oil to pass through. The final product is a crystal-clear version of organic EVOO, known as filtered olive oil. This is typically what you see on retail shelves.

Keep in mind that even when the oil looks clear, if it sits for even a few weeks or months, more olive particulates may settle to the bottom of the container.  These molecules may have not been visible at the beginning, but they are still completely normal. These particles can make it look like there may be a small cloud at the bottom of the oil container. These clouds don't mean that the oil is bad -- it's just an indication that the Organic EVOO is a natural product that settles over time.

5. the idea Of Organic Olive Oil is more about paperwork than growing practices

Olive trees are hearty and don't require many pesticides to be produced. They are not like other fruit like strawberries or apples -- they live year after year and grow stronger.

Regular Extra Virgin is grown in a very similar way to Organic EVOO. However, the organic variety has to be grown in a quarantined specially-designated area. Certifying that an olive oil is organic is a long process and requires auditors to survey the land and confirm that farmers are following all of their promised organic growing plans.

If you are an organic food brand using bulk olive oil as an ingredient, you'll have to buy the organic version -- even if they are both produced very similarly. You'll need to be able to show your olive oil's organic certification paperwork for all your own audits.

Remember, if your supplier provides their own organic documentation this means that an auditor has surveyed the paperwork going back through the entire supply chain. This makes it so you won't need the have the original farmers name on the certificate or any other data tracing backwards. The same applies when you buy a retail bottle of olive oil with the organic seal on the label.

Organic Extra Virgin Olive Oil is the highest quality olive oil, and as to be expected, is going to be the highest price.

Extra Virgin Olive Oil is a high-cost olive oil because it is a fresh-press premium-quality grade. That being said, Organic EVOO is going to an even higher cost, because you are paying for the paperwork and multiple auditors to confirm it is grown and packaged organically throughout the supply chain. Last, you will be paying for the organic growing process itself (care of the trees and organic land).

Not many oils available on the market that are more expensive than Organic Extra Virgin Olive Oil. Organic Coconut Oil and Organic Avocado Oil would be the only others in the same ballpark.

The answer here is yes and no. The supply of Organic Extra Virgin absolutely dominates the supply chain in comparison to the other grades.  Think about it from the farmer's perspective: if you went to all this trouble taking the time and energy to grow and pay to certify organic olives, you will be motivated to take great care of them so that the oil can be produced and sold as Extra Virgin, which can bring the most money in.

Another interesting one is Organic Refined Olive Oil. This product does actually exist but it is very rare. That is due to the fact you have to take high quality Organic EVOO and organically refine it (which can add to the cost).  This oil is in low supply so it's usually a special order item if available at all.

The answer for Organic Olive Pomace Oil is a very strong NO. Pomace is produced by using a solvent called hexane, and hexane is not organic certified or allowed for use with any organic products. You can't put the two characteristics of "organic" and 'pomace" together.  If you do see a product labeled as such, remember, it's not a real thing so don't believe it!