When it comes to food manufacturers who are debating if they should use olive pomace oil, this oil is a great fit for some, but not for others.

If you are a home chef and looking for oils to use in your kitchen, you may have heard of olive pomace oil as a cheaper option in comparison to other oils. So is it bad or is it good?

There's a lot of information out there, whether you're a home chef or if you're a food manufacturer. Today I'll try to lay down some objective clarity and you can make your own path.

The #1 reason why a chef or home cook wouldn’t want to use Olive Pomace Oil is because it’s a solvent expelled oil. If you want to learn more about exactly how it’s made, read this article How Olive Pomace Oil Is Made. Or you can also watch this slideshare presentation:

I personally try to use the highest grade of organic, expeller pressed oils in my kitchen, because I want to put high quality organic stuff in my body as much as possible.

This means that I'm not using Olive Pomace Oil in my kitchen, though I know that there are many people who do -- nothing against either choice.

That said, I hear a lot of poo-pooing of olive pomace oil by people who still use conventional canola and soybean oil without realizing the hypocracy. To me, this lacks a greater understanding of all oils, as well as the fat make up of different oils. For example, if your canola oil doesn't explicitly say "expeller pressed", "cold pressed" or "organic"* on the label, it is a solvent expelled oil. This is the most common way that all oils are produced around the globe today. Conventional hexane-produced canola makes up over 90% of the canola oil on the market (thought non-gmo expeller pressed canola oil is gaining traction to adjust that ratio in the future).

Just bear in mind that if you have conventional soybean or canola oil in your home kitchen, pomace is no different -- and it least it's made up of the healthy monounsaturated fats found in olive oils. So it's actually a significant step up!

(*Note: Stating organic on the bottle doesn't actually explain anything about how the oil is extracted, and whether it was expeller pressed or not. However, because of processing methods almost all organic oil is also expeller or cold pressed. Try to look for both descriptors.)

Pomace Misses Out On The Many Health Benefits in EVOO

Olive pomace oil misses out on some of the unique disease-fighting health benefits (like polyphenols) that are only available in Extra Virgin Olive Oil. These benefits are unique to high quality Extra Virgin Olive Oil (though this is heartily debated by those throughout our industry) or at least found at the highest levels in EVOO.

In terms of the health benefits found in olive oil, Extra Virgin has far more of the good stuff than the lower grades.  Refined grades like Pure Olive Oil, Refined (Light) Olive Oil and Olive Pomace Oil are going to have less (or debatably, none) of the unique healthy-for-you components.

If you want to learn more about these health benefits, read What Makes Extra Virgin Olive Oil So Healthy?

Pomace Lacks The Fresh, Strong Flavor That EVOO Has Extra Virgin Olive Oil has a strong flavor that depends on olive varietal, but typically tastes buttery or peppery and fresh. It should always have a distinct and delicious flavor. Olive Pomace Oil is going to taste much more bland because it is a refined oil — like a sunflower, grape seed, or safflower oil would.

So if you depend on the delicious flavor of EVOO to make your product, don’t expect that pomace will have the same results. You’ll want to stick with what you’ve got!

The #1 reason why a manufacturer wouldn’t want to use Olive Pomace Oil is because it’s a solvent expelled oil. This may not matter to some, but for those in the natural foods industry, or those that want the highest quality product don’t appreciate this fact.

Plus if you work with Whole Foods they require that any solvent extracted oils can’t be used as a stand alone ingredient. They specifically outlaw “solvent extracted oils, as standalone single-ingredient oils (except grapeseed oil)”. In other words, you couldn’t use a 100% Pomace, but you could use an Expeller Pressed Non-GMO Canola Oil and Olive Pomace Oil blend.

If your product line already uses RBD Canola or RBD Soybean Oil, you can consider Olive Pomace Oil a step up for a new product line. 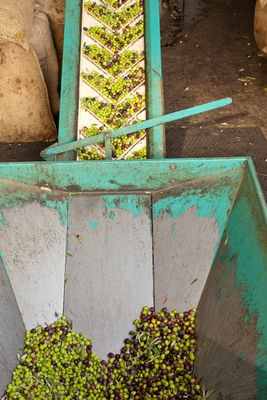 Your Product Represents The Highest Quality

For manufacturers who choose all of their ingredients by selecting the highest quality options, Olive Pomace Oil won’t be a good fit. There’s no way to debate this point, because it’s the lowest grade of olive oil available.

Your Product Depends On The Taste Of EVOO

If your finished product gets it's perfect flavor profile by having that hint of flavor from the Extra Virgin Olive Oil, don't change anything!

Olive Pomace Oil is a refined oil which means that it has less color and less flavor -- so it won't bring as much to your product if your food depends on that EVOO. Stay with what you've got.

One option, if you really needed to cut costs, would be to go with a blend of some sort with another oil. It will still have a slightly milder flavor but the taste of EVOO will still come through.

Why Would You WANT To Use Olive Pomace Oil?

Tune back next week and we'll review it together.

Answering those questions require defining exactly what olive oil is and the process...