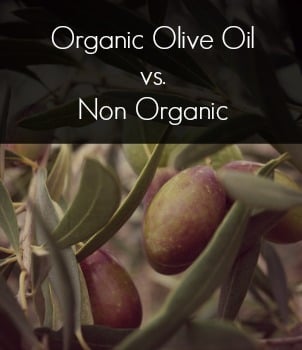 Are they really a different oil? Quick and easy answer is no, they are almost the exact same oil as each other.

The reason they are so similar is that they are both the grade “Extra Virgin”. They are both made from the first press (or spin) of the olives. Both oils have the same chemical requirements/limits for fatty acid profile, free acidity, and lots of other chemical markers. They both also go through the same testing that allows them to be called the grade Extra Virgin.

The primary difference between these oils is that one is produced using organically grown and certified olives, and one is not.

When comparing the differences between organic EVOO and other grades, it will depend on the grade of oil to deem how different they are. The olives will be similar to what is used to produce Extra Virgin Olive Oil; however, the process of how the oil is made and the final oil quality is different.

Some examples would be grades like Refined and Pure Olive Oil: these grades use expelling similar to organic extra virgin olive oil, but then are later refined using a high heat process. The final resulting oil is also very different in taste, color, and more. This refining process is starkly different than the process for organic EVOO, which is typically unrefined.

Another example is Olive Pomace Oil, which is extracted using a solvent to expel the oil rather than physical pressing or spinning in a centrifuge. This is very different than organic EVOO, which can’t use solvents in any of it’s processing because solvents aren’t organic.

The oils above also have different chemical limits for each of their respective grades.

Organic olives are documented by an accredited organic certifying agency to be grown without pesticides, chemical fertilizers, or other artificial agents. This documenting is very important: it is like guaranteeing on the farming side of things that the growing process has been done right, and it is how an oils “organic-ness” can be traced all the way back to the soil it came from.

The bigger picture is that olive trees in general are a very hearty tree, requiring little to no pesticide intervention to grow olives normally (organic or not). Many growers, especially those outside of US, don’t use any chemicals on their trees. However, the organic certifying process documents and guarantees this fact for consumers.

Is it worth the additional cost for Organic Extra Virgin Olive Oil? For manufacturers making an USDA organic certified product, absolutely.

For a consumer, the answer is a bit different. Keep in mind that the most common organic olive oil type is organic extra virgin olive oil -- so when we compare organic olive oil with other oils, this is typically the grade that we are comparing.

When comparing this organic extra virgin olive oil oil to regular extra virgin olive oil, no it's really not that different.  The oil is very similar, but it just depends on how passionate you are about wanting to eat organically.  As I mentioned though, regular EVOO doesn't require much (if any) pesticides.  Of course, this is not a guarantee across all farms and brands, but for the most part, even with regular olive oil you're not going to be consuming a lot of chemicals or other pesticides people are normally trying to avoid when eating organic.  So is it worth paying much more?  It all depends on your personal priorities.

Is organic extra vrigin that different than some of the other regular olive oil grades like pure olive oil?  Yes, this oil starts to be a lot more different in color, flavor, functionality and heat tolerance.