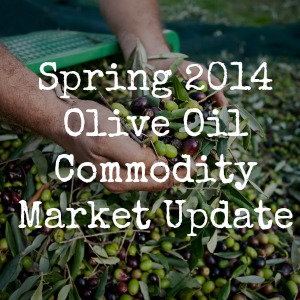 This last spring has been a good time to need olive oil.  Spain had a great harvest this past winter (even better than originally expected), with talk of record production levels.  It looks like production has finally returned to normal after the decrease in 2012/13.

Prices are lower than they were last year at this time.  However, prices aren't falling quite in line with where they were 2-3 years ago (at the all-time 9 year low), though production is nearing those same levels again.  It could be quite some time before rates reach similar record lows the future.

While Spain has had a banner harvest, other producing countries like Turkey, Tunisia and Greece have all had decreases in production.  Because of that, many are pulling from the good Spanish supply of olive oil.  Italy's production remains the same as the last harvest, requiring them, as with most years, to pull from Spanish stock as well.  Portugal's production, though small, continues to rise.

Prices have remained low through the spring, but with the new harvest blossoming and production for 2014/15 unknown, many manufacturing mills are reluctant to lock down contracts for Q3 & 4.  As the growing season continues, we expect to have more predictions about the next season and the probability of contracts will begin to open up again.

To help you stay on top of this information, Centra Foods has created a new commodity market tracking tool.  It allows you to view the olive oil market and compare to price trends from the past.  You will get good picture of where the market really is today, enabling you to make smart decisions for your business in the future.

The demand for coconuts has skyrocketed in the last few years. Coconut everything can be found in the natural food market. Coconut oil, coconut sugar, coconut water. Not...

Using Olive Pomace Oil as opposed to a different grade of olive oil, or even a different seed oil, will have some pros and cons. There’s reasons why a food manufacturer,...