When it comes to the constant market fluctuations of bulk olive oil, global production (aka, how much olive oil is available in the world) plays a central part. However, there’s one more important thing to factor in: the strength of the euro.

The euro plays a key role in the olive oil market. This is because Spain, who is the “market driver” of olive oil prices uses euros as their currency. Because the world is using Spain’s market as a gauge for their own, this currency affects the olive market in particular. For buyers in the US, the euro to dollar conversion can become an important component of what prices look like — even if you specifically don’t buy in euros.

The chart below shows the increase in the dollar to euro comparison over the 2017 year. As you can see, the US dollar weakened, going from a low of 1.05 dollars to 1 euro to a high of 1.21 dollars to 1 euro just after the turn of the new year. 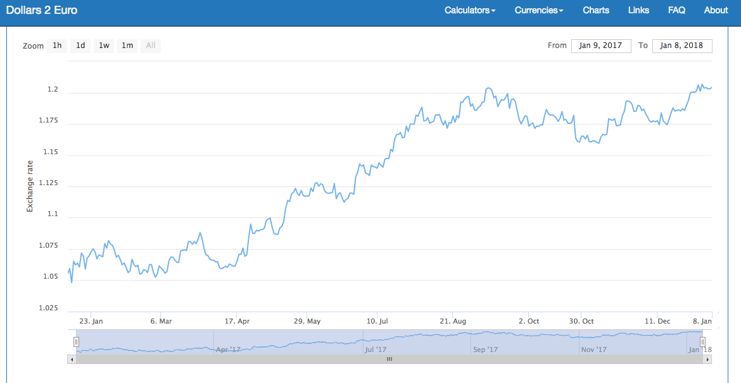 Olive oil commodity market comparisons and timing can be a complex thing. If you have any questions or want to learn more about the market, please reach out to us anytime.

This article was written by Dr. Mark Hymen and originally published here. Dr. Hymen is an industry leader on the topic of fats and oils, and is the author of "Eat Fat...

The demand for coconuts has skyrocketed in the last few years. Coconut everything can be found in the natural food market. Coconut oil, coconut sugar, coconut water. Not...