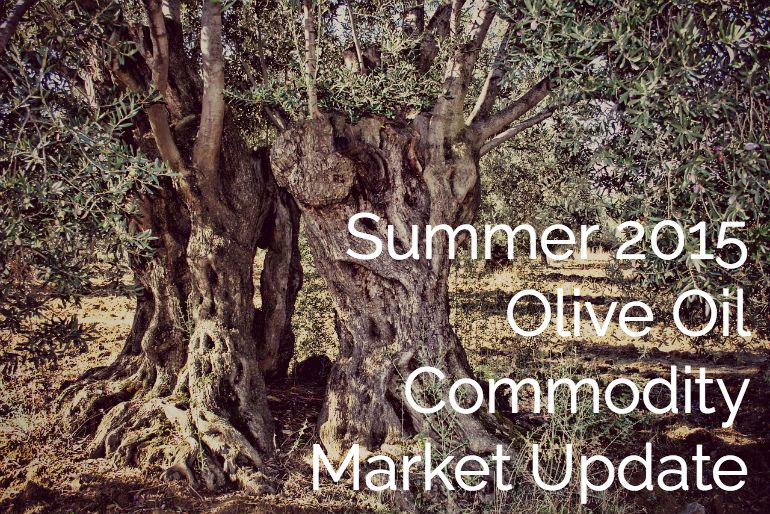 This last years harvest (October 2014 - January 2015) was substantially down from the year prior, and we’ve seen both lack of supply and a resulting increase in prices over this spring and summer.

Every year, olive oil prices are at their lowest between December-January, at the peak of the harvest season. Over the spring and summer, prices continue to slowly rise as the world’s olive oil inventory is used up. In the middle of September, Spain officially announces what their next year’s harvest is going to look like (this matters because they are the world’s price driver), and prices either jump up or drop down accordingly.

Because of this annual cycle, olive oil prices in the summer are often high and many olive oil users look forward to the next season with fingers cross for a good year.

Production in the 2014/15 harvest season was lower than plentiful years prior. Overall, the world’s production was down a total of 29%. This was caused by a 42% drop in production in all EU countries, which is where most of the olive oil is made.

Spain’s production dropped 53%, while Italy’s production dropped 52%. To give you some perspective, just for those two countries, that’s a total of 1,185,700 Metric Tons or 2,608,540,000 (2.6 BILLION) pounds of oil that was not produced this year in comparison to last. That’s 60,000 truckloads of oil that didn’t exist in the world this year that was available last year. You can see why that’s bound to affect supply and demand and prices!

As a result of the lower production and higher prices, imports did drop in some locations. Imports into Australia were down 14%, imports into Canada were down 11%, while imports into the US were down 2%. On the other hand, imports rose in Japan 10%, in Brazil 3% and in China 2%. The IOC refuses to comment on the debate if prices are fair, given the costs to produce vs. the possibility of dwindling demand if prices go up to cover those costs. They state:

“It is not for the IOC to judge whether these price levels reflect an adequate balance between production costs along the supply chain and the prices that consumers are prepared to pay in their domestic currently to continue consuming olive oil. Never the less, this is a concern that all market players will no doubt take into account for the long-term sustainable equilibrium and development of the sector.”

As mentioned in prior commodity market updates, Spain has had a bumper harvest this last season (October 2013-February 2014), in...

I know what today REALLY is… a prep day for the holiday tomorrow! With that in mind, I’ve compiled a bunch of delicious recipes using olive oil (of course, what else did...