Can You Cook With Pomace Olive Oil?

Many chefs and home cooks ask if they can cook with pomace oil.  Short answer: Yes you definitely CAN. But should you? Are there better options available to you that you should use instead?

There are so many opinions about Olive Pomace Oil floating around that today I'd like to break down the pros and cons specifically for consumers, chefs and those cooking in their home kitchens.

The great debate that you'll find surrounding Pomace all comes down to how the oil is produced. It is the only olive oil that is made using a solvent extraction. This means that a solvent (a type of chemical, typically hexane) is added to the ground-up dry olive remains to get the last of the oil out. This solvent later is evaporated in a high heat process, so there should not be any left in what you are actually eating. Pomace pales in a quality comparison next to the fresh and delicious Extra Virgin Olive Oil.

Now, before you begin to place any judgement on Pomace Olive Oil, first check your pantry for any bottles of vegetable, canola, sunflower, soybean oil.  If they don't say expeller pressed on them, these oils are ALSO produced using the same exact method of solvent extraction.  Even though it doesn't say it on the label, solvent extraction is industry standard for many different types of oils -- especially the cheapest ones!

Many people tend to be upset by the idea of olive oil being produced using a solvent (because they are comparing it to EVOO), yet continue to use these other solvent expelled vegetable oils without knowing how similar they really are.

How pomace olive oil is made 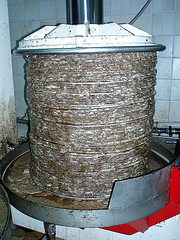 Let's back up a step and talk about the exact process of how pomace olive oil is made.

The name pomace comes from the "pomace" of the olive which is the dry remains of olive fruit, skin and the pit after virgin olive oil has been produced.

To make Extra Virgin Olive Oil, they first will grind-up the olives into a paste. This paste may be pressed (like the photo here) or spun in a centrifuge, which is a more modern system.  A centrifuge will extract the oil by spinning it extremely fast -- think of the spin cycle on a washing machine. Out from the other end of the centrifuge comes the oil, waste water, and the dry remains of the olives.

The remains (otherwise known as pomace) are stored as a dry pulp, but they still contain about 8% oil inside of them. From here, you have two realistic options.

1.  The pomace could be disposed of which will waste the oil, or
2.  The oil must be taken out of those dry remains. That involves solvent extraction -- typically hexane.

To get a perspective of this, think of a wet sponge.  You can get most of the water out of the sponge by squeezing it (EVOO). However, after you squeeze a sponge there will still be water in it -- it is still damp! This is just like the Pomace.  You know the water/oil is in there, but you can't get any more out.  The solvent draws the last of the oil out (or in our example this would be the drawing out the water of the damp sponge).

After the solvent is added and oil is removed from the pomace, the oil goes onto the refining process, where it will be heated using steam and the solvent evaporates.

Undiscussed topics usually surrounds the last step, which is the heating process. There has been concern in the past that in unregulated or unqualified mills the process of heat may be more that what is needed, and that a harmful residue called polycyclic aromatic hydrocarbons can be produced.

It is important to keep in mind though that this level of residue is highly regulated by the IOC, so if you purchase oil that is IOC compliant these levels are checked and must be under their required limits, so you would therefor be in the clear.

If you can come to terms with the fact that it's produced in the same way that other conventional oils in your pantry are, then we can get down to the nitty gritty about the oil!  Now we'd like to answer:  Is Pomace Oil ideal for cooking?

it stands up to heat

Pomace Olive Oil will stand up to heat when you are baking, cooking and doing hot-fill processes in manufacturing. This means that the heat used in cooking and the general process of making your food won't damage the oil, including the taste or the smell.

The reason it can stand up to the heat so well is because it has already been submitted to the high heat refining process, so any flavor or color changes that might come from being heated to high levels are already there. It's already at the final color and heat already, so it can stand up to hot temps (up until it's smoke point). EVOO won't stand up to heat in the same way because it's a cold-produced oil.

The smoke point of pomace olive oil is extremely debated. Some say it's around 390° F while you will find others say up to 450° F. For this type of olive oil, it will stand up to heat better than extra virgin would. Personally, however, I think you'll want to keep the temperature below 425° F.

There's No Affect to the flavor of your dishes

Because pomace olive oil has been refined, it has a very light color and little flavor compared to other oils. This means that when you use pomace in products like bread, crackers, dressings, hummus, etc. it won't adjust the flavor profile.

If you are looking for a mild olive oil that won't affect your flavor profile, Pomace will work well.. Now, if you want the taste of olive oil to show up in your foods, I would suggest an extra virgin olive oil.

It's Made from healthier fats

Pomace olive oil is still made 100% from olives, which means that the makeup of lipids are still the same as other olive oils. All olive oils have a high level of monounsaturated fats and a low level of saturated and polyunsaturated fats.

Are you looking for the right oil for your food production? We know that the features of an edible oil can make it the perfect fit or throw it out of the running in...

There are so many thoughts and opinions floating around that I...