The Difference Between Linoleic Mid-Oleic and High-Oleic Sunflower Oil 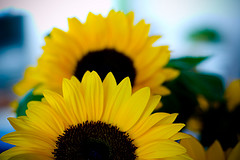 Sometimes, it's hard to know exactly what kind of oil going to work best.  If you're in the R&D stages of a new product, you'll be faced with decisions about choosing the right bulk ingredients.  Sometimes, as you begin to narrow down your search, you may be presented with more and more challenging questions.

For example, let's pretend you've been debating between Canola Oil, Extra Virgin Olive Oil and Sunflower Oil for some time.  You finally make the decision to go with Sunflower Oil.  Unfortunately, you're immediatly presented with a new question: what kind of Sunflower Oil would you like?

Certain oils, especially seed oils, come in a few varieties.  For sunflower oil, there's high oleic, mid oleic and linoleic.  And as you're making your ingredient decisions, it's helpful to know the differences before you begin testing-- not after.

These terms refer to the balance between polyunsaturated and monounsaturated fats in the oil, which are linoleic acid and oleic acid, respectively. Mid-oleic oils are the result of the industry to move away from hydrogenation, which causes trans fat.

High oleic oils are considered the most healthy, and have the most monosaturated fat that makes up the oil.  Linoleic is comprised of more polyunsaturated fats (considered a less healthy fat) and mid oleic falls somwhere in between.

This type of oil is also found in hydrogenated form.

High-oleic sunflower oil is radically different in its makeup. It consists primarily of monounsaturated oleic acids, at around 80 percent of the total. Saturated fats and polyunsaturated linoleic acid make up the balance, in equal proportions.

Mid-oleic sunflower oil takes a middle position between the two traditional oils, with oleic acid accounting for roughly two-thirds of the fat content, polyunsaturated linoleic acid at roughly 25 percent, and about 9 percent saturated fat.  Mid-oleic oil retains high enough levels of linoleic acid to remain an excellent dietary source, but the relatively high levels of oleic acid make it less prone to rancidity and breaking down, eliminating any need for hydrogenation and the resulting trans fat.

Some manufacturers making a thicker product prefer this oil over traditional high-oleic sunflower oil for it's emulsifying properties.

This article was originally published by Centra Foods in 2014, and has been re-published with updated information here.

Sometimes, it's hard to know exactly what kind...

High oleic oil is a term that you will see applied to many different types of oil: canola, sunflower, safflower and more. High oleic oils have seen a recent spike in...